Transitioning to Caldwell for High School: My Experience

I first arrived at Caldwell Academy my freshman year of high school. At my previous school, I felt like I was never challenged enough academically. My parents and I chose Caldwell for the classical education model. We valued how the curriculum integrates the Humanities and highlights the practice of rhetoric and public speaking.

Honestly, at first the change was difficult. Suddenly I was in an environment where I was being continuously challenged academically. The amount of work was not only demanding but also intellectually taxing. I felt overwhelmed with expectations to be the best possible version of myself. What I came to understand was that it was okay to fail sometimes, even when I did my best. It’s interesting to think about how much we worry ourselves with the simplest problems in our daily lives. These problems that felt so great at the time are hard to remember now, as a senior. Somewhere in the middle I realized I had to take a step back and look at the big picture. The moments we experience we will never get back, so finding the good in them makes all the difference.

What has really helped me feel supported through my years at Caldwell was how understanding the faculty and staff are. The teachers here always listen to any issues the students may be having and try to take action to resolve it. There was not one instance where I personally felt my problems were overlooked or pushed aside. Looking back to my previous school, and hearing input from my friends that go to other schools, I really don’t think you can get that same kind of acknowledgment everywhere.

It took about two months for me to get completely used to everything socially and academically. At Caldwell, most of the students had known each other since elementary school. In the beginning, it was difficult to find a group of people I could see myself hanging out with. I was 14 years old and still finding out who I was as a person and where I would fit in. Now I can say I have made amazing friends and acquaintances. If I could give advice to anyone that wants

to meet new people, I would say to join as many clubs and sports as you can. What is great about Caldwell is that many of the sports accept anyone who wants to play. And even if it seems like something you may not be interested in, there is nothing wrong with trying something new. My biggest regret is not joining as many clubs and sports as possible. Now I am the leader of the International Club, with an awesome group of members that are interested in appreciating and learning about cultures around the world.

Speaking from experience, what I like most about Caldwell are the small events and gatherings that bring the whole Rhetoric School together. One of my favorites is how Caldwell celebrates different holidays throughout the year. During Valentine's Day, the boys dress

up in official uniforms, prepare breakfast and hold doors for all the girls. For Christmas, the seniors get the opportunity to decorate the halls with Christmas themes. Others that have always been so much fun have been the Rhetoric Retreat, big rival games against Westchester, and 7/17 events. 7/17 is a group run by Dialectic and Rhetoric School Dads: they plan events each quarter that have a spiritual component and fun, silly games or activities.

These events are such a great way to have fun with classmates and meet new people. With its smaller numbers, Caldwell really understands the importance of having a close-knit community.

Caldwell is unique in so many ways, such as size of the school,

classical education, and uniforms. I understand if many parents of new students and new students themselves looking at the Rhetoric School may be anxious about some uncertainties. Change can be difficult, but in my experience at Caldwell, it was absolutely necessary. The Rhetoric School has benefited me in so many ways that without it I truly believe I would not be ready to go out on my own after high school. Caldwell has prepared both my mindset and work ethic to face anything now and in the future. 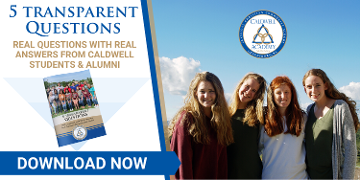 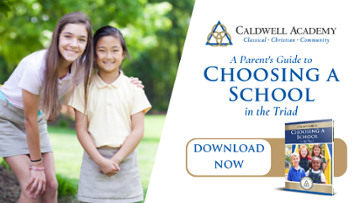